Movements at the Cross

I’m traveling overseas in the next few weeks. There will be lots of movements. We’ll be packing up our barracks and equipment. Staging Soldiers and their gear. Moving to the airfield. The long flight with at least one stop. We’ll land several time zones away, and then board a bus to our location. Once on post, we’ll likely fall in on temporary quarters for several days before we are able to settle into our more permanent quarters. There will be LOTS of movements in the days and weeks ahead. It’ll be wearying for us.

My preparations and movements overseas will roughly coincide with Holy Week - that week of our Lord’s entry into Jerusalem, his sojourn into the depths of human suffering and brokenness, his transit into death, and his rising to resurrection life. We tend to mark these occasions in the same worship space, and thus it is easy for us to lose the sense of movement inherent in Jesus’ Great and Holy Week.

Much of Jesus’ preaching, teaching, wonder-working, and crowd-gathering took place in Galilee, well to the north of Jerusalem. But Jesus’ ultimate encounter with and conquest over humanity’s brokenness would take place in Jerusalem. As he headed south, Jesus ascended a plateau in the Judean mountains to approach Jerusalem, the city on a hill. He entered the heart of Jewish religious and Roman imperial power with the fanfare of a royal parade, simultaneously mocking Rome’s foreign rule over these lands and claiming - by reimagining - what that true royal authority looks like. Later he would be taken outside of the city gates to be executed, and buried in the earth out of which God made humanity in the first place. Jesus rises from the grave, wounds and all, to return down the Judean hillside and travel north to Galilee to bless his disciples before ascending into heaven.

If the ancients had frequent flier miles,
Jesus was racking them up.

There’s little that’s settled in this story. For the One who said that “the Son of Man has no place to rest his head” (Luke 9:58, Matthew 8:20), this makes sense. There’s all kinds of movement in Jesus’ final days and in his resurrection life. Jesus traveled from place to place. Mass crowds followed Jesus from the countryside to the city. All kinds of dust - literal and figurative - got kicked up. It’s a series of transitions, of movements, of upheavals and of transformation.

Yet we often prize being settled. We talk about “settling down” in a job, a relationship, a city. Jessicah and I breathed a big sigh of relief as we moved into Carmel nearly six years ago - our 7th address in our 5th state as a married couple. The accumulating effects of moving every few years was taking its toll on us, and we were relieved to know that this would be our long-term home.

Yet the story of our Lord’s Passion reminds us that unsettled moments, transitions, and upheavals are places of holy encounter. Perhaps because it is in these places where the veneer of comfort is peeled away, and we find ourselves vulnerable and open to the leading of our Lord to the cross, to the grave, and to the promise of everlasting life.

May your Holy Week and Easter be marked by the joy of the resurrection, but also by a vulnerability that leads to transformation at the foot of the cross and the opening to the empty grave.

Countdown to Race Day By Pastor Chris Duckworth Back in... 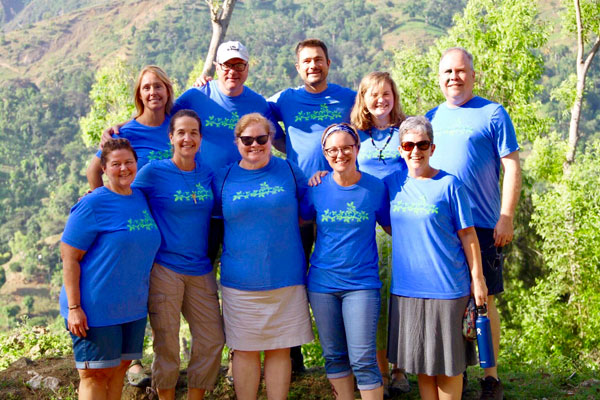 Outreach Ministry Community Meetings   Would you like to join...